Monday, March 6th was the 2017 Inter City Finals Tournament held at Deland. All of the Teams from Deland, Orange City, Ormond Beach and New Smyrna Beach met at 8:30 am this morning for a final end of season tournament. The A and B Teams were chosen according to the percentages of games won or lost during the season from October to March.  The Tournament was sponsored by the Orange City Shuffleboard Club. Richie Burrell Directed and tabulated the results of this very successful tournament.

We would like to thank the many people helping with the organization/support of the tournament including, Dee Metz, Christine and John Giumarra, Carolyn Burrell and the many others who helped with the food and court management .  There was coffee and donuts in the morning in addition to a great lunch with subs, potato salad, drinks, coleslaw and salad.   At the end of the tournament, while we waited for the results, there was cake and ice cream.

The A Team, Dorine Bessette and Leo Gagnon 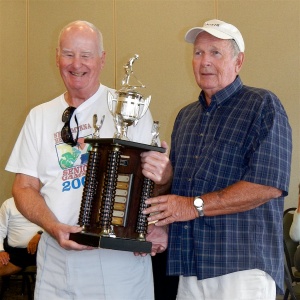 The B Team, Bob Tiger and Dave Helverson