We have lost the Orange City Shuffleboard club. I will not delve into the reasons here, but suffice to say it will be missed by members and visitors alike, especially those of us who played in the several District tournaments they put on for use each year. It was a wonderful location and we shall all miss it very much, especially the rocking chairs on the front porch of the clubhouse!

The Northern District has sent a letter of thanks to club president Alice Vandervender, recognizing the ” hard work and dedication while performing your duties as President of
the Orange City Shuffleboard Club. … Your club was always welcoming and hospitable.” 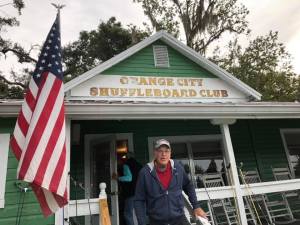