This year for the Mardi Gras Parade the CMS Club Members decided to add a float to the enclosed tricycle Tom and Sue pedaled in the last parade. Rich Kordeleski provided his car and trailer for some members to ride on and throw beads from. At 3:00 pm the Decoration Crew went to Rich’s home to festoon the trailer and car. They then drove it to S. Atlantic for the parade line-up.

At 5:30 pm members met at the clubhouse to obtain masks and a banner before heading out as a group to the parade line-up. The day had started out OK but as the sun set while waiting for the parade to begin at 7:00 pm, it got colder and foggier with a brisk northeast breeze. Johnnie’s daughter, Cynthia, came with her car so that some of us had a place to sit down and wait. Cynthia also took some great pictures which have been added to the slide show below

At 7:00 pm the parade began with flashing lights, loud music and an enthusiastic, appreciative, friendly and sometime raucous crowd all along the parade route. We threw Mardi Gras beads to the crowd and called out to friends and acquaintances who were watching us go by. The parade is fairly short (approx. one hour +) and was over too soon. We had a great time and plan to join in the fun again next year.  Hope to see you there! 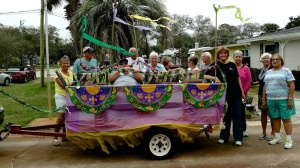 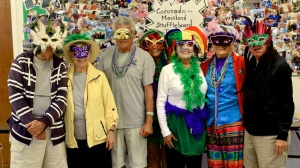 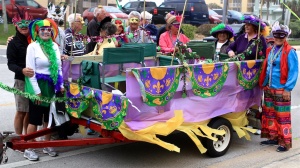 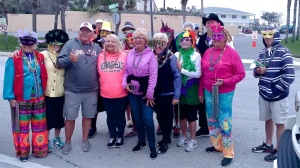 More Pictures From The Parade