The Masters Tournament took place at the CMS Shuffleboard Courts on March 23rd and 24th. Thirty-Two (32) avid players turned up to meet the challenge. Rich Kordeleski and his crew put the courts in excellent shape. Marguerite and her kitchen crew had coffee and donuts on hand. Every thing was properly prepared for this special event.

Then the rain came and delayed the start of our play until Ten o’clock. Finally sixteen (16) courts were dried clean ready for play with volunteer pushers at the Foot and Master shufflers at the Head. Each category of the Pro Men, Pro Women, Amateur Women and Amateur Men were assigned their first challengers by Jack Wooten. Within their categories each shuffler played two games (4 matches) on Thursday morning, then took a lunch break followed by two more games (4 matches) in the afternoon.   Friday morning we all arrived and began the play right on schedule at 8:30 am. Each shuffler had two more games (4 matches) in the morning and after lunch, they each had their last game (2 matches).  The last match was halted due to rain.  Jack Wooten, ND Event Director, tallied up the final scores.

All the shufflers, pushers and volunteers headed out to Quail Hollow (per Stan Williamson’s invite) for the Masters Tournament Banquet. Paul and Marguerite Fortier helped serve spaghetti with meatballs, bread and salad.  The table decorations were charming and festive.  Allen Best welcomed all of us to Quail Hollow and acted as the Master of Ceremonies.  Allen recognized all our sponsors and introduced the Northern District Officers. Joan Best gave the prayer and then lead us in the Pledge of Allegiance.

Jack Wooten made the presentations for Move Up Pins, Participation Pins and then the two Frank Wilson Awards for the Tournament of Champions.  This year may be the first time we had a husband/wife team win. Bonnie Radke won Amateur Women TOC and Randy Radke won Amateur Men TOC.  Jack announced the placement for this Master’s Tournament after which he then presented this years Northern District HALL OF FAME inductees. Kudos to all!

Many thanks to all the participants who helped make this tournament a success.

Please refer to the Northern District website for more additional information on the tournament. 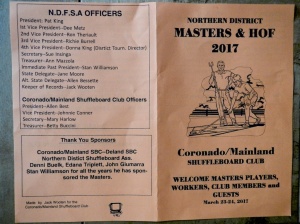 Program for the Master’s Banquet

More Pictures From The Master’s Tournament and Banquet