Saturday, February 4th at 10 am we met in the CMS Club house for our Executive Board Meeting. Seven (7) board members were present. Don Nephew and Marty Bystrom were absent. Al Best (President) conducted the meeting.  Arden reported on the new brooms and Zak reported on the work he has been doing toward our 80th Anniversary Celebration. We discussed the discs and what the city is doing about our courts. We had a short break.

At 11:00am we began our General Board Meeting.  Don Nephew arrived so we had Eight (8) board members and Eighteen (18) regular members.  One of the biggest take-aways from this meeting was the motion to authorize the acquisition of New Discs from Wayne Lockwood’s generous gift to the club.

We also need to give a real big SHOUT-OUT and appreciation to Zak Wonson and his Committee (Cindy, Joan, Connie, Barb Nephew and Arlene) for all the hard work they have been doing in preparation for the Club’s 80th Anniversary Celebration that will officially be held on Saturday March 4th. Anniversary wrist bands and pins have been ordered.  We will have the event open to the public.  There will be a further report later.  Al reported that the city had not approved the  resurfacing of our courts in the 2017 budget.

The Mayor’s Tournament is this Tuesday, February 7th beginning at 8:30am. We will have coffee and donuts for a Meet and Greet the Mayor social before the tournament. He must leave at 9:00am so please be early. Everyone in the club is invited to play. We would encourage our club members to wear their club anniversary shirts when they come to support the club.  Dennis Buelk will preside over the matches which he will run much the same as the Singles Mingles play. There will be a $2 entry fee and  a CM Shuffleboard Club donation of $50 toward the prize money. There will be 12 frames and five matches in order to be done by lunch time. All participants and helpers will be welcome to join us for complimentary SUBS (supplied by our club).  Just a reminder that members must be 18 years of age or older. Children must be accompanied by an authorized adult.

February 28th (Fat Tuesday) is the Mardis Gras Parade. The club will be participating like we did last year with costumes, beads and Tom Grubb’s Peddle Cart. We have banners to carry and posters announcing our Open Fun Day on March 4th. We will meet at the Club house at 5:00pm before the parade and walk over to The Oceania on S. Atlantic Ave. to line up at 5:30pm. The parade will begin at 7:00pm.  The short parade will march up S. Atlantic, go left on Flagler and travel down to the shuffleboard courts at the intersection of Pine St. We will meet afterwards for refreshments at the club house. It would be nice if you can wear your club 80th Anniversary Shirts and/or Purple, Green, Gold colors.

Our Annual Banquet will be HELD on March 11 in the Main Clubhouse Meeting Room. That’s Amore’ will be providing the meal. 5:00 to 6:00pm is the social hour with the buffet dinner to follow.   Please let Joan know by next Thursday if you need a special Glutton Free meal. Volunteers to help set up the banquet room would be appreciated.  $20.00 per person tickets are being sold by Bonnie, Joan, Barb Fortini, Marguerite and Arlene.  The meeting was adjourned at the close of club business. Ciao! 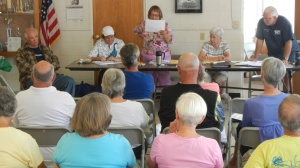