Fun Day was sunny, clear and a bit chilly. Forty (40) fun loving members showed up to be challenged by our altered shuffleboard courts. Hot dogs, coffee and chips were served at noon before members were assigned to their courts and team captains. Many passersby wondered what we were doing having so much fun on our zany looking courts. Twenty (20) courts had been set up with a different challenge and/or obstacle. Sid Pomainville and Arden McConnell presided over and helped set up the diverse courts with the help of volunteers. We had ten teams, each with four members.   The nominal $1 donation per person was spread out so as to have all ten teams win something back in return. The winning teams were First Place (1350 points) – John Fortini (Captain), Paul Fortier, Robert “Mouse” Wolven, and Guy Godman.   Second Place (1340 points) – Rich Kordeleski (Captain), Ben Sharman, Bill Boyes and Randy Radke.  Third Place (1330 points) – Gerry Bousquet (Captain), Diane Woodhams, Bob Tager and Joey Shebester.   Fourth Place (1300 points) – Rex Galusha (Captain), Mona Carkner, Floyd and Terry Conley. We are looking forward to our next Fun Day! 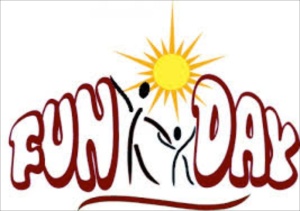